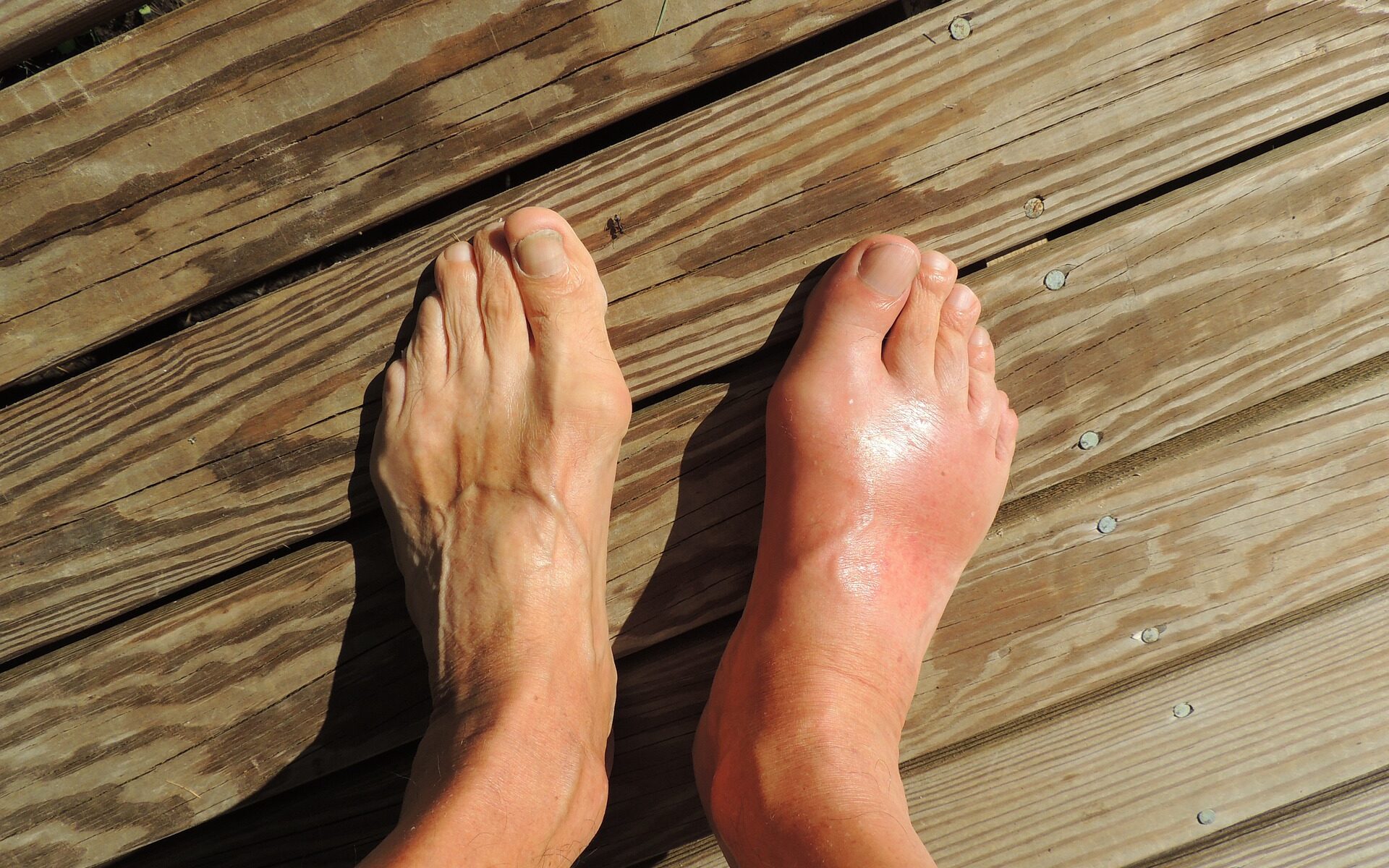 What You Should Know About Gout Leg and Gout Neck

Gout can be awfully painful and incapacitating but treatable in almost all patients. Gout is a major foot problem, but it can also involve several other joints. It is important to know how to identify and treat it early to prevent complications.

Gout is a common type of inflammatory arthritis that causes swelling and pain in the joints, usually occurring as flares that last for more than a week. Gout flares often start from the big toe. Gout occurs when high levels of Uric acid build up in the body, which then forms needle-shaped crystals in and around a joint. This leads to inflammation of the joint.

When the body makes too much uric acid, also known as urate, or gets rid of too little, urate builds up in the body. Uric acid is produced daily when our bodies disintegrate purines. Purines are natural chemicals produced in the body, but they are also found in certain foods. However, not all people with high levels of Uric acid will not develop gout.

The joint mostly involved in gout is the big toe (the first metacarpals) and is called podagra. More than one joint may be involved in a gout attack (and it can be any joint in the body), with the most common sites being in the feet, knees, elbows, and ankles. Rarely, gout neck occurs. They are uncommon manifestations of gout which involves tophaceous deposits in the larynx and auricular helix, as well as gouty arthritis of the temporomandibular, cricoarytenoid, and sternoclavicular, joints (1).

The joint of the big toe is the most affected site of an acute gout attack. Unless gout is treated, these attacks can recur. Other sites like fingers, elbows, and knees are where people may experience gout (2). Gout attacks are characterized by swelling, warmth, reddish discoloration, marked tenderness, and rapid onset of pain at the affected joint. Consult a physician even if the pain is gone. Over time, they can harm tendons, joints, and other tissues.

Gout moves through several stages, which include:

How is Gout Diagnosed?

A physical exam, medical history, and tests can help diagnose gout. Gout tests to be done include:

How is gout treated?

What are the symptoms of gout?

Symptoms of gout are not usually obvious unless there is a gout attack. These attacks usually last between four to seven days.

When you have gout, Uric acid crystals build up in your joints for years without you being aware they are there. Over time, excess crystals in the joint start to leak from the cartilage into the space in a joint.

The tiny, hard, sharp Uric acid crystals rub against the soft lining of the joint, causing a lot of pain and inflammation. This is known as a flare or attack of gout. A flare is a period in which the symptoms come back or get worse.

When an attack of gout occurs, the affected joint becomes very painful, red, and hot and appears swollen.

The onset of a gout Attack is very quick, mostly during the night.

If a gout leg is left untreated, attacks may become frequent and can spread to other joints. Although gout mostly affects the big toe, other joints include the ankles, knees, elbow, wrist, and fingers.

A gout attack can occur in several joints at the same time.

When Uric acid crystals form outside of the joints and are seen under the skin, forming small, hard lumps, it is called tophi. the white color of the crystals can sometimes be visible beneath the skin. The most common areas for tophi are:

Although tophi are not usually painful, they can obstruct one’s daily activities. They sometimes become inflamed, open up and leak fluid with gritty white substances – these are the uric acid crystals.

Tophi also grows within the joints and cause damage to the cartilage and bone. Complications of tophi when not properly treated include a decrease in joint mobility, necrosis of the skin (cell death), ulcerations, compression of nearby nerves when it occurs in the spine, wrist, or elbow (3)

The inflammation that occurs during a gout flare can become severe enough to cause gout with fever, fatigue, and malaise. These symptoms often occur when there is a gout attack on two or more joints.

There are many risk factors for gout that increases your chance of developing it.

This is the most common risk factor for developing gout, especially when many family members already have it, such as your parents or grandparents. Even though your kidneys are healthy, sometimes inherited genes make it difficult for your kidneys to flush uric acid as well as they should.

Being obese also makes it more likely that you will develop:

These conditions can all reduce how much Uric acid is filtered by your kidneys.

Gout is four times more rampant in men than women. It affects men of any age, but the risk is higher in older men. Gout rarely occurs in women before menopause. This is because the estrogen in women increases how much uric acid is filtered out by the kidneys. After reaching menopause, estrogen levels go reduced and uric acid levels go up.

Some medications can increase your risk of developing gout, examples include:

Some studies have shown that there is a correlation between eating gout and tomatoes triggers. Any food that increases the levels of uric acid in the body is a risk for people with gout. Since one’s diet can play a huge role in increased levels of uric acid in the blood, it is important to pay attention to the foods that trigger a gout flare. Many people with gout have identified tomatoes as one food that triggers gout flare-ups. Tomatoes contain two potential gout triggers: phenolic acid and glutamate (4). Although they are only present in minute quantities, some people have reported tomatoes as their gout triggers. Tomatoes may be worth removing from your diet if you believe they cause gout flare-ups.

Examples of food with highly concentrated levels of tomatoes include ketchup, pasta sauces, and vegetable juices.

Studies have shown that caffeine can precipitate gout flare in some people. Coffee might help prevent gout in people who do not already have the disease, but the caffeine it contains could spell doom if you already live with gout especially if you are not a consistent coffee drinker. The reason is that caffeine has a similar structure to allopurinol, a drug used in the treatment of gout. When you first start taking allopurinol, there is an increased risk of gout attacks since the uric acid is been mobilized from body tissues. Consequently, an inconsistent coffee drinker will activate this pathway, causing more gout attacks. Over time, taking allopurinol consistently reduces the uric acid in the blood, such that attacks no longer occur.

Turf toe can be easily mistaken for gout. Turf toe, also known as hyperextension, occurs when the big toe is far too bent towards the top of your foot (5). This can cause a sprain of your ligaments or toe.

How are gout and turf toe different?

In gout arthritis, damage to the joint occurs internally, which means there is uric acid buildup and urate crystals at the joint. But with turf toe, the injury to the joint is from an external force that bent the foot in a type of way.

The symptoms of gout arthritis are due to the formation of uric acid crystals at the joints or around the soft tissue, making it painful and difficult to move joints. In turf toe, the symptoms are due to hyperextension of the toe and surrounding ligaments and joints. Another difference between gout and turf toe is that

Gout can be managed with medications, diet, and lifestyle changes. While in turf toe, none of these treatment strategies help with turf toe.

Septic arthritis is a serious complication of gout arthritis. It is a painful joint infection that is caused by germs traveling through the bloodstream from another part of the body. Septic arthritis also occurs when a penetrating injury, such as trauma or an animal bite delivers germs directly into the joint.

gout and septic arthritis are major diseases that are clinically similar and often cannot be distinguished without a synovial fluid analysis.